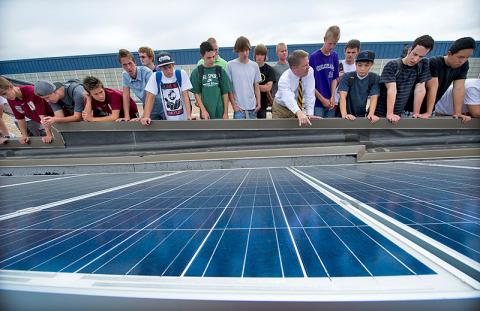 One of the main obstacles that the growth of clean energy has faced is people. People are inherently resistant to change and are skeptical of “new” technologies that stand to replace the old ways of doing things. With age often comes natural complacency, which is why many believe change, especially in terms of environmental initiatives, is in the hands of the youth. Many solar companies have combined this mentality with their solar technology by implementing their solar panels and awareness programs in school districts around the state.

Antioch Unified School District is one such district taking the solar pledge while also teaching their students the immense value and potential of solar energy. Beyond the educational benefits, it is estimated that the project will save the district up to $2 million in the first year alone, which will be redistributed  through school programming and ultimately improve the district tenfold. Antioch is located just northwest of Modesto, where Premier Renewables is extensively involved in agricultural solar. We are excited that surrounding areas are finding practical applications for solar as well!

The completion of a solar project at 16 schools in the Oakland Unified School District (OUSD) is also making a big impact in California. According to the EPA, this installation is expected to save about 2,500 tons of Carbon Dioxide from reaching the atmosphere per year, which is the equivalent of taking 12,000 cars off California roads over the next 25 years. In addition to the solar installations themselves, each school is also implementing a solar education program that’s being intertwined with existing STEM (Science, Technology, Engineering and Math) regimens.

The PG&E Solar Schools Program has also been spreading solar through their $6 million initiative to enrich students’ and the surrounding community’s lives via shareholder funded solar installations at hundreds of schools throughout California. The schools are found in many of the same cities that Premier Renewables operates including: Fresno, Visalia, Clovis, Monterey, Santa Cruz, Stockton, Modesto, Bakersfield, Santa Maria and lastly, San Luis Obispo where our office is located.

With the successful completion of UCSB’s solar installation by Premier Renewables only a few months prior, the team is incredibly excited to get more involved in the growth of solar in schools across California. For more information, please visit: www.premierrenewables.com.