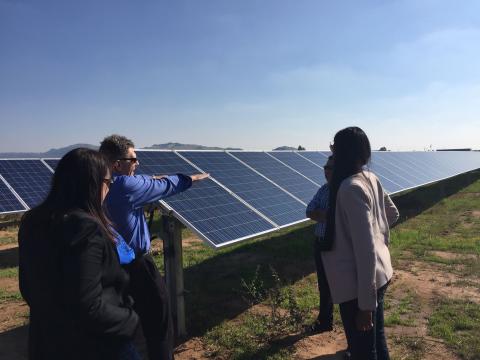 2016 is just around the bend and many solar supporters are getting anxious about the future of the solar tax credit. Most of their worry stems from the belief that this is the ‘cliff’ for the industry. The solar industry has not only seen an immense amount of accelerated growth these last few years, but has been a positive investment for America as well. We are truly beginning to see the benefits of diversification, consumer choice, lower electricity bills, and job growth. Agricultural operations, dairies, colleges, and local schools, where solar once seemed far-fetched are now seeing the range of immediate and long term benefits through stability, savings, and their operations future success, it would be detrimental to put this growth to a halt.

Last week Premier Renewables drove out to Orange Cove, CA to meet with the District 22 Field Representative Rudy Mendoza and Sol Systems, to discuss solar energy’s impact on the local community and the State of California. Last year Premier Renewables completed a 900 kW solar energy system that provides 2,000 MWh of solar energy directly to the utility grid each year.

The construction of this solar farm in Orange Cove resulted in over $75,000 spent locally in District 22 during the construction process ranging from meals, lodging, entertainment, fuel expenses, etc. This infused needed capital into the local economy. $400,000 was spent for labor, subcontractors, electrical suppliers, and equipment rentals. Premier also spent $800,000 in additional California sourced electrical materials which were out of Los Angeles and the Bay area. With the 30% Investment Tax Credit coming to an end in 2016, Rudy Mendoza was curious about the benefits solar provides to his community.

WHAT IS THE 30% TAX CREDIT FOR SOLAR?

It is called the Investment Tax Credit (ITC) and is the solar industries most important policy. The ITC is a 30% federal tax credit for solar energy systems on residential and commercial properties that will remain, under the current law in effect through December 31, 2015. The tax is a dollar-for-dollar reduction in the income taxes that a person or company claiming the credit would otherwise pay to the federal government.

WHO QUALIFIES FOR THE ITC?

Almost anyone who wants to install solar on a residential or commercial property. Many agricultural operations and colleges are taking advantage of the ITC, which has enabled them to significantly decrease their solar installation costs as well as their operation’s bills. With the federal tax credit, dollar-for-dollar reduction in the amount of tax owed and accelerated depreciation write-offs, the solar energy system costs can be reduced to almost half and the payback period decreases to only 5 to 7 years.

WHY DO WE NEED THE ITC TO CONTINUE?

Since the multi-year extension of the credit in 2008, solar prices have consistently fallen year after year while installation rates and efficiencies have continued to climb. The continued success of the ITC demonstrates that a stable, long-term incentive will reduce prices while creating jobs in the solar industry. Without the ITC the U.S. stands to lose 80,000 jobs in 2017, plus an additional 20,000 jobs related to affected industries, totaling 100,000 American jobs! In contrast, if the ITC is extended the tax would yield 61,000 more solar jobs in 2017 and 58,000 in 2021. Total investment into the U.S. economy is projected to yield more than $124 billion during 2016-2022 and $39 billion more than if the ITC expires.