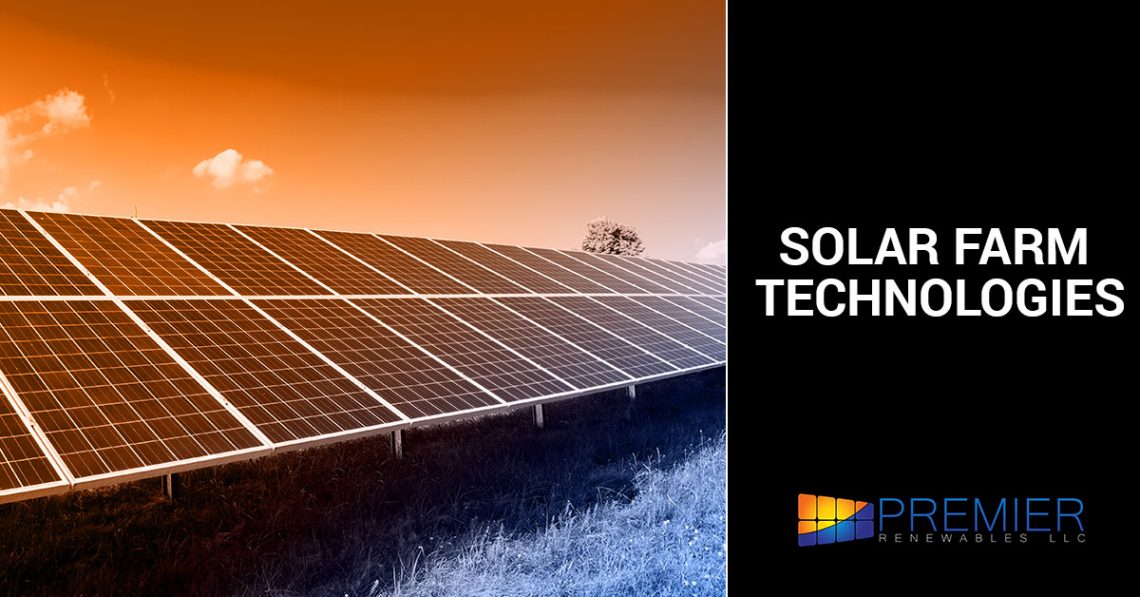 Photovoltaic solar power is a relative newcomer to many industries. Solar technology is only a few decades old, and the idea of powering your business or farm with solar power is a bit alien to most people and the technology is even more alien. Traditional power sources usually involve burning a fuel or some reaction that heats water and drives a turbine that generates electricity. Everything from coal to nuclear essentially works that way with differing levels of complexity, cost, safety, and efficiency. However, solar power does something novel and extremely different. Here at Premiere Renewables, we strive to make solar technologies and their benefits known to businesses across a range of sectors. The US and especially right here in the San Francisco area of California, there are a range of incentive programs for solar powered businesses and agriculture. In today’s blog we’ll be helping you better understand the technology behind commercial scale solar power systems.

Solar panels are built to house and protect photovoltaic cells. Photovoltaic cells are the most basic and important component of a solar power system and the key part that actually generates electricity directly from sunlight. They solar cells use advanced semiconductors that absorb sunlight which then knocks electrons out of silicon atoms. These electrons are the form the direct current (DC) electrical charge taht comes from the solar panel. In grid-tied solar systems the DC electricity is changed into an alternating current (AC) of electricity by power inverters or power conditioners. The power inverters also direct the energy for onsite use or to be sold back into the electrical grid (net metering) depending on where you live and what municipality you use. In California, these credits and incentive systems can be very generous for commercial clients.

Having smaller systems that lead into larger systems and system clusters has two big advantages. First, the system can be both scalable and expandable. This means that a system that needs more power simply needs more solar panels, and perhaps an upgrade to their power inverter or power conditioner. These upgrades are far cheaper than replacing a whole system, and allows an expanding business to scale their energy use. Any excess energy can always be put back into the power grid, at times for energy credits. Second, system clustering helps cut the costs of any maintenance that may be required. Any large scale failures can only occur from somewhat modular parts from catastrophic damage to the solar power site. In the rare case that a panel failure occurs, a replacement can be put in with little to no interruption in power generation.

The orientation of your solar power system will change depending on the global latitude coordinates of the power system. This is made even more complicated be our planet’s tilted axis. The change in angle of sunlight that occurs is a big reason for seasons and also for the existence of gimballed solar arrays that automatically trace the sun. At Premiere Renewables we tend not to use these systems as the moving parts can increase maintenance and makes them only needed when building a solar site that prevents optimal directional orientation.

For maximum efficiency, solar arrays generally have a south facing orientation in the northern hemisphere and a north facing orientation in the southern hemisphere. Tilt of the arrays at a 180 degrees generally produces the most energy as it is the average angle of sunlight through differing seasons. In extreme latitudes the optimal angle differs. To find the proper orientation installers must consider the site conditions on the ground, site shade possibilities, customer aesthetics, solar panel tilt, electrical use schedules for the grid, and expected changes as the system ages. Most solar systems have 20+ year lifespans meaning that long term issues like usage change, climate, solar expansion, or even tree growth must be taken into consideration. If use of your solar power system is concentrated in a particular portion of the day then facing can be shifted east or west to allow for more effective electrical generation to match peak times.

Inverters convert the DC electricity to an AC current so that it is compatible with modern electrical systems. While converting electricity, the inverter also monitors your solar power system’s power generation and the demands from the network. If demands are more than the solar panels are generating then the system can increase draw from the main power grid. If the system is creating too much energy then it can be bled off or put back into the system. In many municipalities and power company areas that means this is where energy credits can be accrued. If usage takes place primarily or partially at night, solar power can be used to charge battery banks or can draw credited electricity from the electrical grid.

Newer power systems can include micro inverters that are attached to individual panels and work together as a network to cut off different elements of the solar power system when not in use, which allows for better energy preservation and easier maintenance.

If you are in the San Francisco area of California and looking for a solar power system for your business, give Premier Renewables a look. We offer financial analysis, custom engineered solutions, installation, and maintenance. Contact us today at (805)-781-0881 or online at www.premierrenewables.com